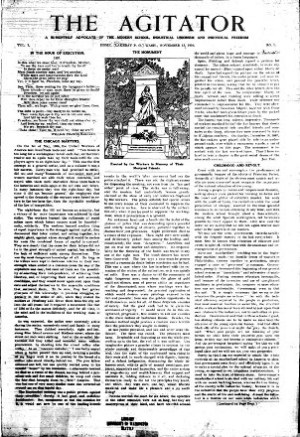 DESCRIPTION
The Agitator, later renamed The Syndicalist was the expression of pre-WWI revolutionary syndicalism in the U.S. Organized by Earl Ford, J.W. Johnstone, William Z. Foster, they formed various syndicalist organizations inspired by the revolutionary syndicalism of the French CGT. Failing to win over the IWW to this brand of unionism, his followers set up the Syndicalist Militant Minority League in Chicago. Soon afterwards renaming the paper The Syndicalist as the organ of the Syndicalist League of North America. Unlike the IWW which attempted to compete with the AFL head on, the SLNA attempted to “Bore from within” the AFL.
ACTIVITY